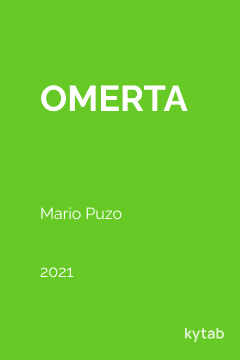 Omerta, the third novel in Mario Puzo's Mafia trilogy, is infinitely better than the third Godfather film, and most movies in fact. Besides colorful characters and snappy dialogue, it's got a knotty, gratifying, just-complex-enough plot and plenty of movie-like scenes. The newly retired Mafioso Don Raymonde Aprile attends his grandson's confirmation at St. Patrick's in New York, handing each kid a gold coin. Long shot: "Brilliant sunshine etched the image of that great cathedral into the streets around it." Medium shot: "The girls in frail cobwebby white lace dresses, the boys [with] traditional red neckties knitted at their throats to ward off the Devil." Close-up: "The first bullet hit the Don square in the forehead. The second bullet tore out his throat."

More crucial than the tersely described violence is the emotional setting: a traditional, loving clan menaced by traditional vendettas. With Don Aprile hit, the family's fate lies in the strong hands of his adopted nephew from Sicily, Astorre. The Don kept his own kids sheltered from the Mafia: one son is an army officer; another is a TV exec; his daughter Nicole (the most developed character of the three) is an ace lawyer who liked to debate the Don on the death penalty. "Mercy is a vice, a pretension to powers we do not have ... an unpardonable offense to the victim," the Don maintained. Astorre, a macaroni importer and affable amateur singer, was secretly trained to carry on the Don's work. Now his job is to show no mercy.

But who did the hit? Was it Kurt Cilke, the morally tormented FBI man who recently jailed most of the Mafia bosses? Or Timmona Portella, the Mob boss Cilke still wants to collar? How about Marriano Rubio, the womanizing, epicurean Peruvian diplomat who wants Nicole in bed--did he also want her papa's head?

If you didn't know Puzo wrote Omerta, it would be no mystery. His marks are all over it: lean prose, a romance with the Old Country, a taste for olives in barrels, a jaunty cynicism ("You cannot send six billionaires to prison," says Cilke's boss. "Not in a democracy"), an affection for characters with flawed hearts, like Rudolfo the $1,500-an-hour sexual massage therapist, or his short-tempered client Aspinella, the one-eyed NYPD detective. The simultaneous courtship of cheery Mafia tramp Rosie by identical hit-man twins Frankie and Stace Sturzo makes you fall in love with them all--and feel a genuine pang when blood proves thicker than eros.

This fitting capstone to Puzo's career is optioned for a film, and Michael Imperioli of TV's The Sopranos narrates the audiocassette version of the novel. But why wait for the movie? Omerta is a big, old-fashioned movie in its own right. --Tim Appelo

"The dead have no friends," says one gangster to another in Puzo's final novel, as they plot to kill America's top Mafioso. But Puzo, despite his death last year at age 78, should gain many new friends for this operatic thriller, his most absorbing since The Sicilian. The slain mobster is the elderly Don Raymonde Aprile. His heirs, around whom the violent, vastly emotional narrative swirls, are his three children and one nephew. It's the nephew, Astorre Viola, who inherits the Don's legacy and transforms before his cousins' astonished eyes from a foppish playboy into a Man of Honor, as he avenges the Don's death and protects his family from those hungry for its prime possession: banks that will earn legitimate billions in the years ahead. Astorre's change is no surprise to the few aged mobsters who know that, as a youth, he was trained to be a Qualified Man, or to the fewer still who knowDas Astorre does notDthat his real father was a great Sicilian Mafioso. Arrayed against Astorre in his pursuit of cruel justice are some of the sharpest Puzo characters ever, among them a corrupt and beautiful black New York policewoman; assassin twins; wiseguys galore, including a drug lord who seeks his own nuclear weapon; and, drawn in impressive shades of gray, a veteran FBI agent who imperils his family and his soul to destroy Astorre. Despite its familiar subject matter, the novelDwhich shuttles among Sicily, England and AmericaDis unpredictable and bracing, but its greatest strength is Puzo's voice, ripe with age and wisdom, as attentive to the scent of lemons and oranges in a Sicilian garden as to a good man's sudden, bloody death. This is pulp raised to art and a worthy memorial to the author, who one last time makes readers an offer they can't refuse. 500,000 first printing; simultaneous Random House audio and large print editions; to be a film from Miramax. (July)
Copyright 2000 Reed Business Information, Inc.